The Paris Mountain State Park was immaculate, and the staff quite helpful, including the campground host who came right over to issue a parking hang tag and let me know there had been complaints about my loud neighbors and their 3 young barking dogs. He gave me the park ranger’s cell phone number “just in case”, but I didn’t have a problem with the tattooed guys at the next campsite.

Kayaking on the lake was a disappointment – I wasn’t allowed to take my new inflatable kayak out, so chose to rent a standard kayak for $5 for half an hour. I warned the young guys manning the boating hut that I might take longer than thirty minutes if I found some good photo spots, and they assured me it would be fine and wouldn’t charge extra since there was no one else on the lake. Turns out, I was back in 13 minutes! The lake was so tiny (it looked huge on the park map) that I traversed its perimeter and even floated in the middle for 5 minutes before heading back. It would have taken longer to inflate than deflate my kayak.

A dozen youngsters were wading in the shallow lake, and a few adults ventured out further. A lifeguard was on duty at the water’s edge near the park office. One of the rangers was leading a nature hike for a group of campers when I arrived to inquire about hiking trails. Today I hiked part of Prissy Ridge Trail, which I found quite steep, full of tree branches, and sweltering in 92-degree heat. Didn’t make it the 2 ½ miles down to the lake, but did find a pretty spot with a fallen log to picnic on while I watched half a dozen bird species flit around.

The campground had 30 and 50 amp service, freshwater taps, and a common dumping station. The sites were close together but angled so that I only saw forest outside my doors. My neighbor’s campfire smoke blew in the windows, so I kept the AC going until nighttime. There were constant 4 bar and 3G Verizon cellular service within the campground, and 3 bar 1X service up on the mountain. I would return here again. For a young family, this would be a great campground. 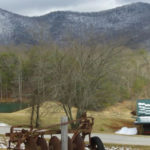 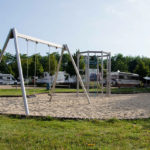 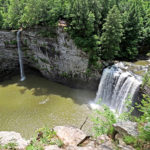 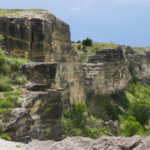