When a nearby fault shifted, 80 million tons of rubble crashed down, blocking up the Madison River and roaring up the other side. 100 mph winds ripped the clothes right off of sleeping campers. In twenty seconds, it was all over, but a domino effect had begun.

Upstream, an earthen dam built-in 1915 to dam up Hebgen Lake cracked but held. The quake caused this lake to tilt 20 feet, engulfing cabins beneath the lake 20’ high waves sloshed back and forth for hours, spilling over the dam and causing the blocked river to quickly fill, trapping RVs, cabins, vehicles, and people. Where there was once an idyllic place to camp along the river, there was now mass destruction. Earthquake Lake had been formed and was rising quickly.

This gigantic boulder was dislodged during the earthquake and left as a testimony to the “Night of Terror” and the 28 who lost their lives here. The plaque contains the names of those who died, including an entire family. There are several well-marked signs provided by the U.S. Forest Service along Highway 287 which point visitors to the old highway that just drops off into space and a mostly underwater cabin. Inside, a 15-minute video and many displays bring the somber facts to life, although the atmosphere in the visitor center is peaceful rather than dire. Forest Ranger, Joanne, has worked here for 30 years and is instrumental in making the center an honoring, yet warm and educational environment.

This working seismograph logs quakes from around the world. When this picture was taken, two relatively small quakes had occurred just up the road near Hebgen Lake. Interested in learning more, I installed an app on my iPhone called QuakeFeed that chimes whenever a “big one” occurs around the globe. The app allows me to tailor the areas of the country I want to monitor.

Inside Yellowstone National Park that August night, no one was killed, but rocks slid and 200+ geysers went off in unison, and some of the geysers altered their “normal” frequencies. The park records as many as 3,000 earthquakes a year, the large majority of them not noticeable to people. Between earthquakes and volcanic activity in this area, it’s a pretty exciting place to vacation!

Inside the Vista Room, visitors watch the film about how Earthquake Lake was formed, and have a panoramic view of the lake and the mountain that slid. It’s an interesting place to visit if you’re planning a trip to the park or find yourself in the area. 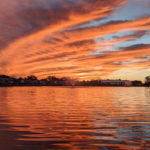 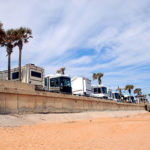 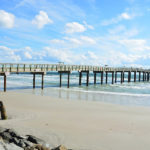 10+ Best Things To Do in Florida 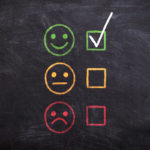 15 Reasons Why You Should Quit Your Job